You are currently browsing the archive for the news category.

I killed the worms off late April, and did OK for a while.  But slowly, more mucus began coming out of my rectum, which started to bleed, more rectal pain, and then I began to feel more tired and inflamed.  I went to a new naturopathic doctor, who put me back on large doses of natural anti-inflammatories. (Curcumin, green tea extract, and high dose fish oil.  Plus, 4 packets of VSL#3 DS a day, l. glutamine, magnesium glycinate, amino acids, and we added glutathione and milk thistle to help detox.)

I also returned to a strict paleo diet, but only lasted 3 weeks before I caved for melted chocolate and honey, wine and popcorn, (chewed up to get the yeast, butter, and coconut oil, then spit out to avoid the fiber. ) The diet and supplements helped.  I also began putting ozonated oxygen suppositories up my butt at night, and though I smell like ozone, the bleeding and mucus is subsiding.

I began B12 shots a few weeks ago, and that is helping with the on and off neuropathy and twitching.  I think it was both magnesium and B12 I’ve been deficient in, among other mysterious nutrients.

But the supplements and probiotics are costing me a fortune, so I’m going back for more hookworms soon.  I want to get a few more mercury amalgam fillings removed and replaced, then will fly down to San Diego and reinfect with 7-10 more hookworms so that I don’t have to be so perfect with diet and supplements.

Moises Velasquez-Marnoff wrote a quick NY Times piece on autism that is getting a lot of attention.  His book, “An Epidemic of Absence” hits the shelves in November.  I know I’m in a little of it, and really not looking forward to reading about my failures with worm therapy.  And here I am, going back to Mexico soon for yet another dose, but this time, I have more things that I’m depending on instead of just the worms. It should be a good book, Moises is an intelligent writer and has spent a while interviewing and piecing this idea together.

I had my GI look at my rectum a few weeks ago, and had an MRI endoscopy to look at the rest of the bowel. He found mild inflammation in the rectum, and mild inflammation in the terminal ilium.  I was surprised that it wasn’t worse because of my symptoms.   It’s probably better now, considering I have little pain left and way less mucus, but I’m still bleeding on and off.  I hope the worms put an end to all of that; when I was hosting them in early spring, I had almost no mucus at all.

My GI told me that maybe in a year, we could revisit the colostomy. He still thinks if I were reattached, I would have too much urgency, since the muscles of the rectum are still scarred and atrophied now from inactivity.  But it put a little ray of hope in my hope-starved soul, so I’m going to try to find anything that heals scar tissue, since I despise this colostomy.

No pyoderma, it never returned since starting the IVIg.  I put the IVig back to its largest dose – 35 grams for 4 days, monthly.  But this past round, I did it at 6 weeks, and after 3 days, I couldn’t take the headache, so I didn’t take the fourth dose.  I still haven’t looked into subQ therapy; I may switch to that weekly, but don’t know if it packs the anti-inflammatory punch that the IV does.

The summer has been nice; I started a pedicab business, just went out on Labor Day weekend and gave people a bunch of rides.  I am sore and tired today, but proud that I could do it.  Two little old ladies told me I was “quite a gal”, as I’m the only female out there in this business.  Little did they know I had a colostomy strapped down under my biker shorts, and weighed 30 pounds less just a year before from surgery and infection.

So, the wormy quest for health continues.  I’m looking forward to the initial high from the hookworms, since I could use the energy to paint my house before winter settles in.

I’m trying to learn my lesson that a strict diet is forever, I need to take supplements forever for good health,  and am trying to enjoy when times are good and rest when they aren’t.  I still want to be superwoman, though. It’s hard having this disease when your spirit is this size of a mountain and your ambition never ends.  I wasn’t meant to have a disease.  I’m ready to for it to end. PROPITIOUS PARASITE: Human whipworm (Trichuris trichiura) eggs from a patient who deliberately infected himself with parasitic worms to treat his ulcerative colitis, an inflammatory bowel disease. The worms may have sent his sent his disease into remission. Image: Kimberley Evason, UCSF END_OF_DOCUMENT_TOKEN_TO_BE_REPLACED

I added a “news” page that lists all the available press on helminthic therapy.Â  I’ll do another page on the research when I have time.

There’s a new film about to be released on using parasites as therapy by Sharon Shattuck called “Parasites: A User’s Guide”. Click on helminthic therapy and scroll down for a full list of research papers on using worms for various autoimmune diseases.Â  It looks like it will be entertaining, and she’s hoping for help with locations to screen her film, if you’ve got connections to your local movie theaters.Â  You can contact her through her website.

To the Medical Community

Article after article extolling the virtues of helminths’ ability to prevent allergies and autoimmune diseases always end in quotes like this:

“The hope is that the work could aid the development of new treatments which work in the same way as gut parasites, by dampening down or rebalancing the immune system so that the body does not respond to allergens and trigger asthma attacks.”

“Here, the view is presented that assessment of the immunophysiological response to helminths could identify that infection with specific parasites would be therapeutically useful (although many helminths could not fulfil this role) and lead to precise knowledge of the immune events following infection, to identify ways to intervene in disease processes (in the absence of infection per se) that can be used to treat, and eventually cure, inflammatory and autoimmune disease.” END_OF_DOCUMENT_TOKEN_TO_BE_REPLACED

A new article from BBC News about the link beteen (lack of) parasites and allergy to dust mites. This is a very large study;1500+ schoolchildren in Vietnam. They gave 1/2 deworming tablets, and studied them for some period of time. Those without worms had a significantly increased allergy to dust mites. There wasn’t any conslusive relationship with asthma or eczema. (Just give them time…) “The researchers said this strongly suggests that gut worms have the potential to tone down human immune responses.” 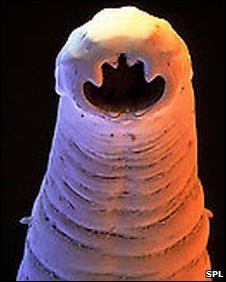 (A face only a mother could love.)

“Parasitic gut worms, such as hookworm, might aid the development of new treatments for asthma and other allergies, a study in Vietnam suggests.

Infection with hookworm and other parasitic worms is endemic in Vietnam, but rates of asthma and other allergies are low.

They found this led to an increase in dust mite allergy among the children.”

“Dr Flohr has examined the links between worms and allergic diseases in Vietnamese children and found that those with the highest level of hookworm infestation were the least likely to have an allergic response to house dust mites.

These findings support the hypothesis that gastrointestinal infection with either hookworms or other micro-organisms protects against allergy and add further weight to the so-called â€˜hygiene hypothesisâ€™.”

Interesting that the highest level of hookworm infection had the greatest benefit. Clearly, dose matters.

I think I need more worms.